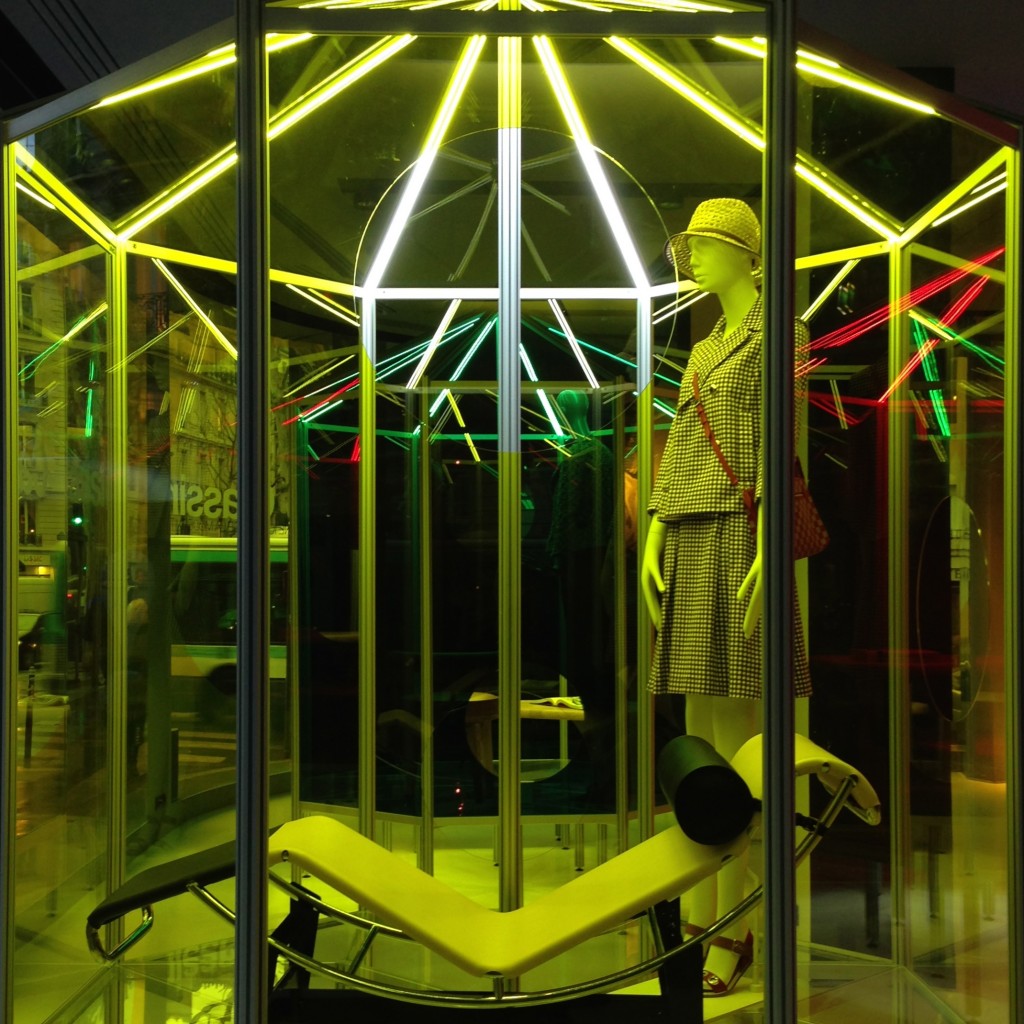 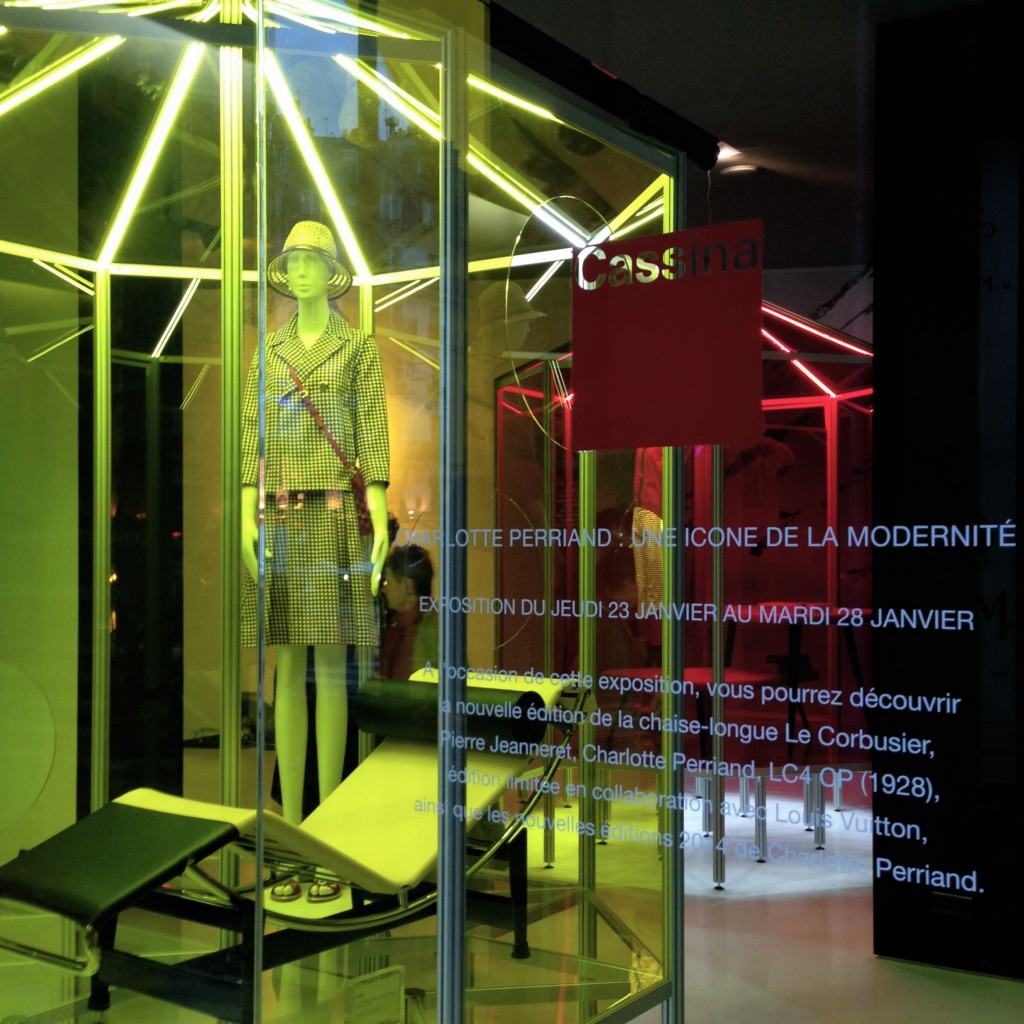 Charlotte Perriand’s works were captured through large round portholes recreated on the windows of the Cassina Parisian showroom, recalling the Refuge Tonneau designed by Charlotte Perriand and Pierre Jeanneret in 1938 – completely reconstructed for the first time by Cassina at the Salone del Mobile in 2012. 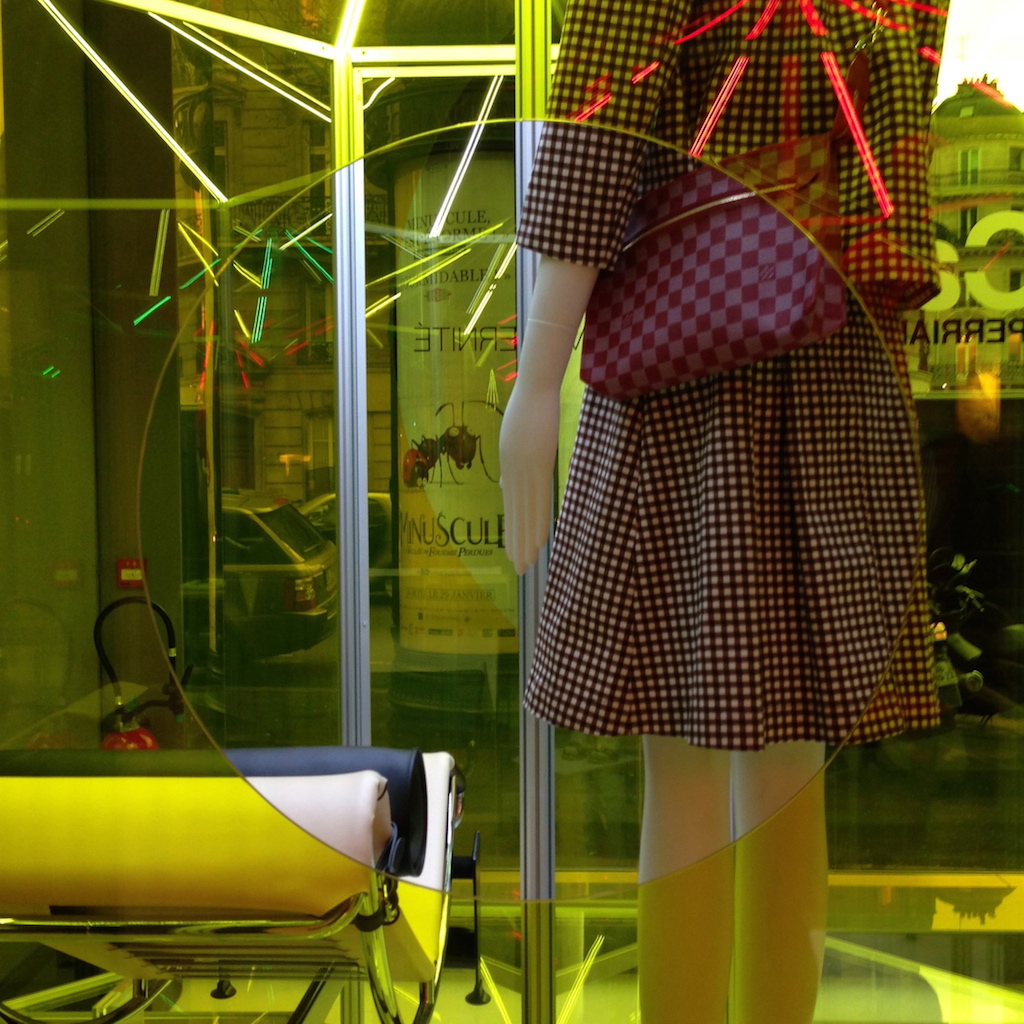 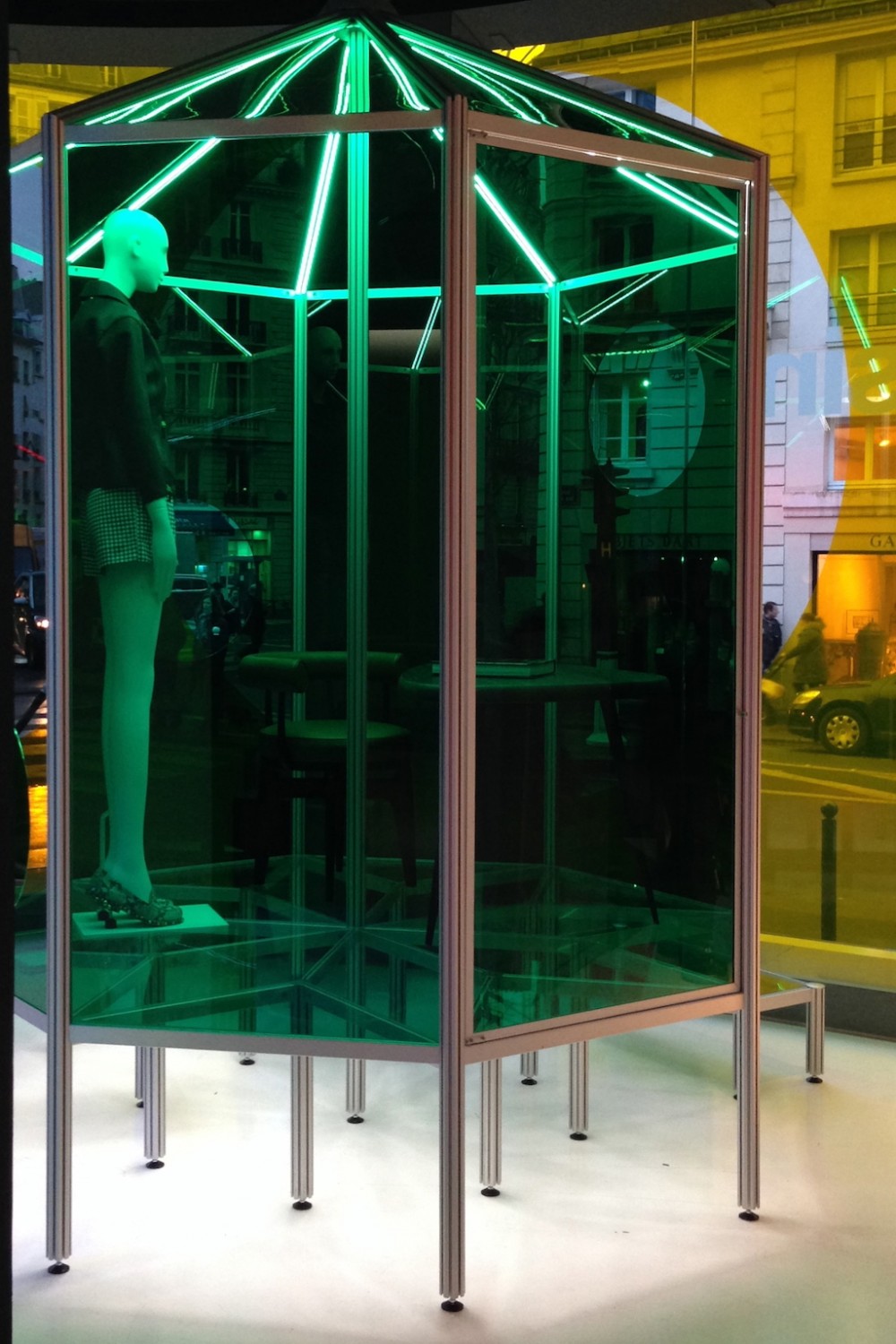 Inside the showroom five similar structures with an octagonal framework had been constructed in vibrant tones of Plexiglas® from Charlotte Perriand’s colour palette (red, yellow, blue, green and transparent), illuminated from below by LED lights. These colours were enhanced by the Applique Pivotant lamps designed by Perriand, covering the entire wall of the showroom’s mezzanine floor. 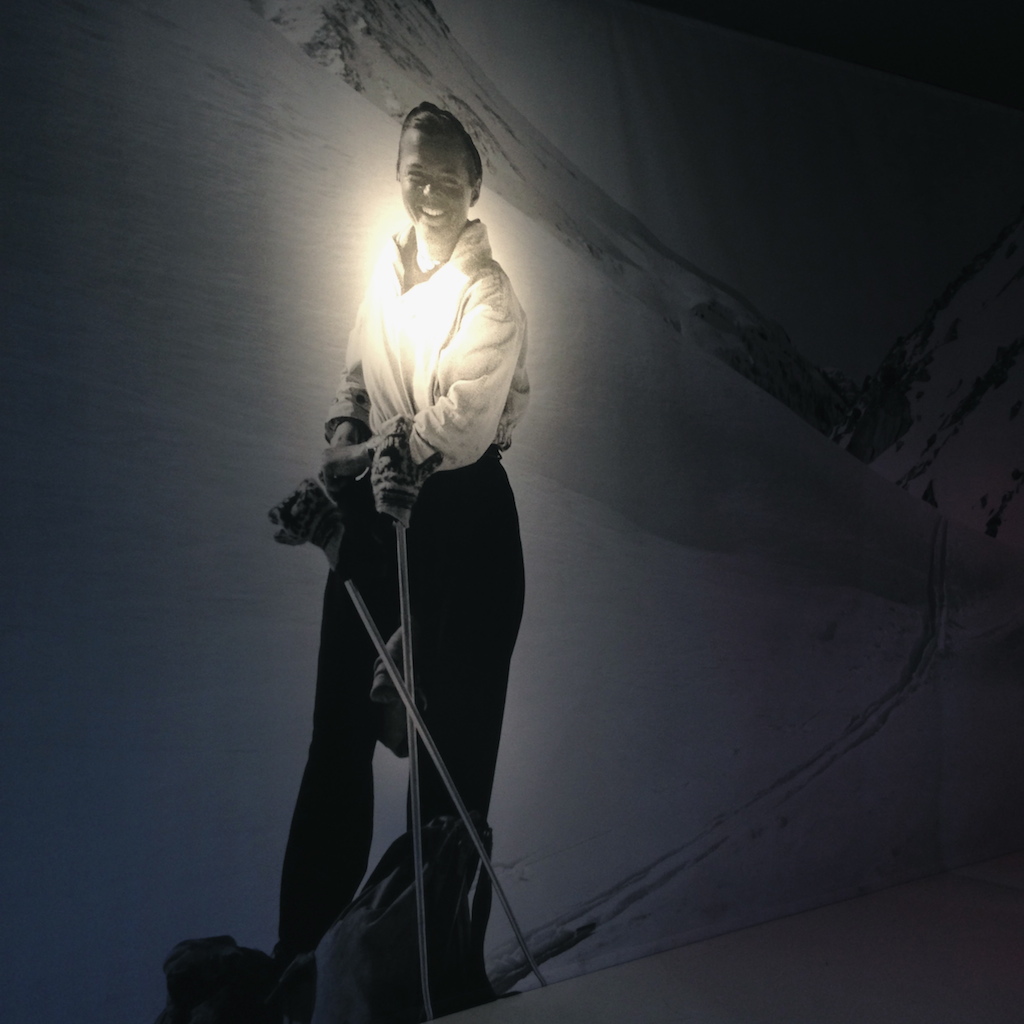 Two giant black and white photographs of Charlotte Perriand in Savoy, France, underlined her passion for the mountains and expressed the determination and independence of this unique feminine figure. 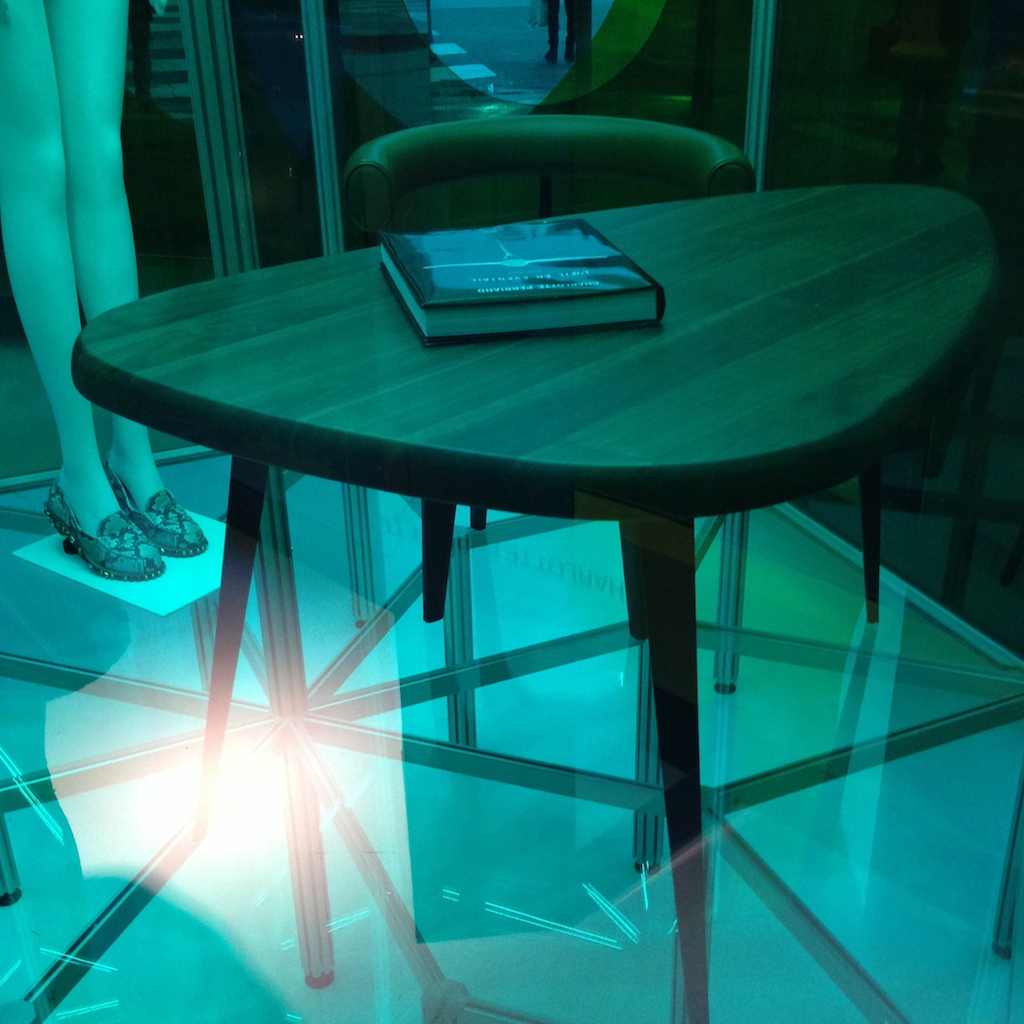 Louis Vuitton has chosen Charlotte Perriand’s non-conformist style as inspiration for the 2014 Spring /Summer 2014 and Fall/ Winter 2014-2015 Icônes Collections. Her passion for travelling, photography, architecture and design led her to create visionary designs with a refined minimalism reflects in Vuitton’s Icônes Collections. A selection of looks from the spring/ summer collection were worn by mannequins in each of the five coloured capsules. This exhibition is simultaneous to the worldwide launch of the new Vuitton window displays featuring Perriand’s furniture. 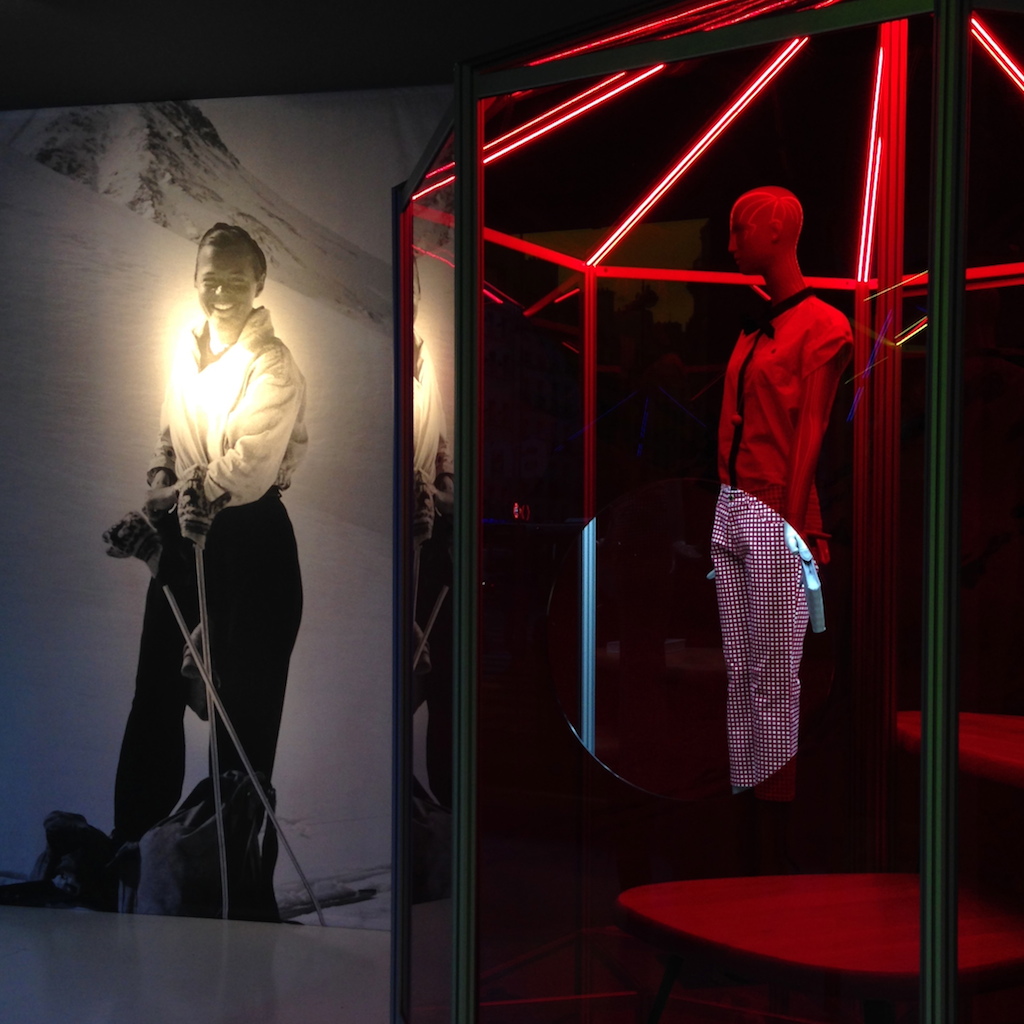 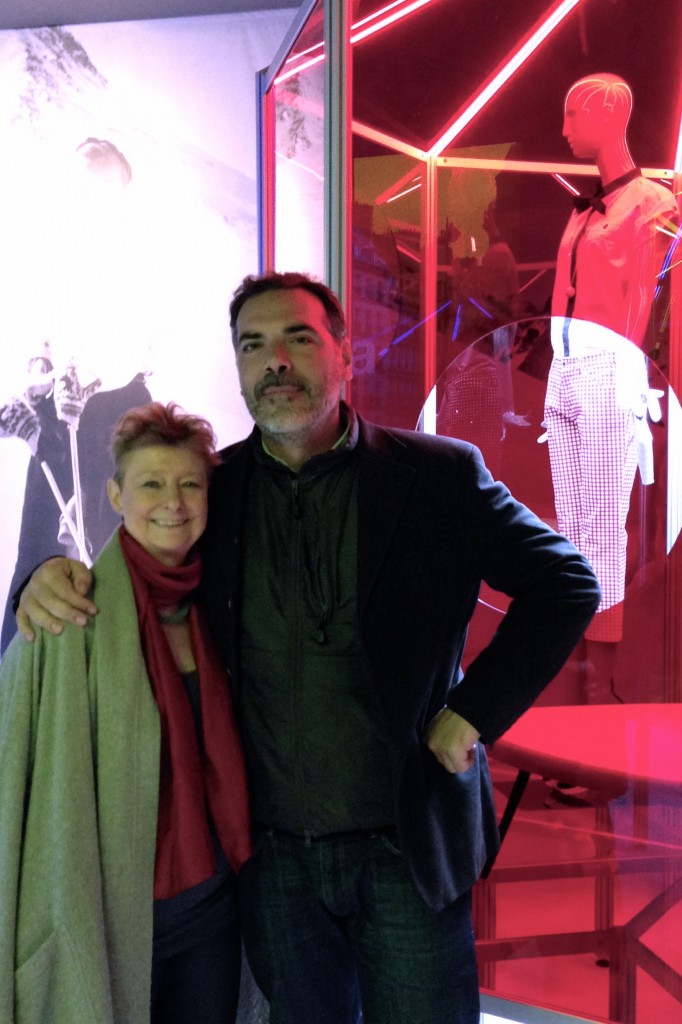 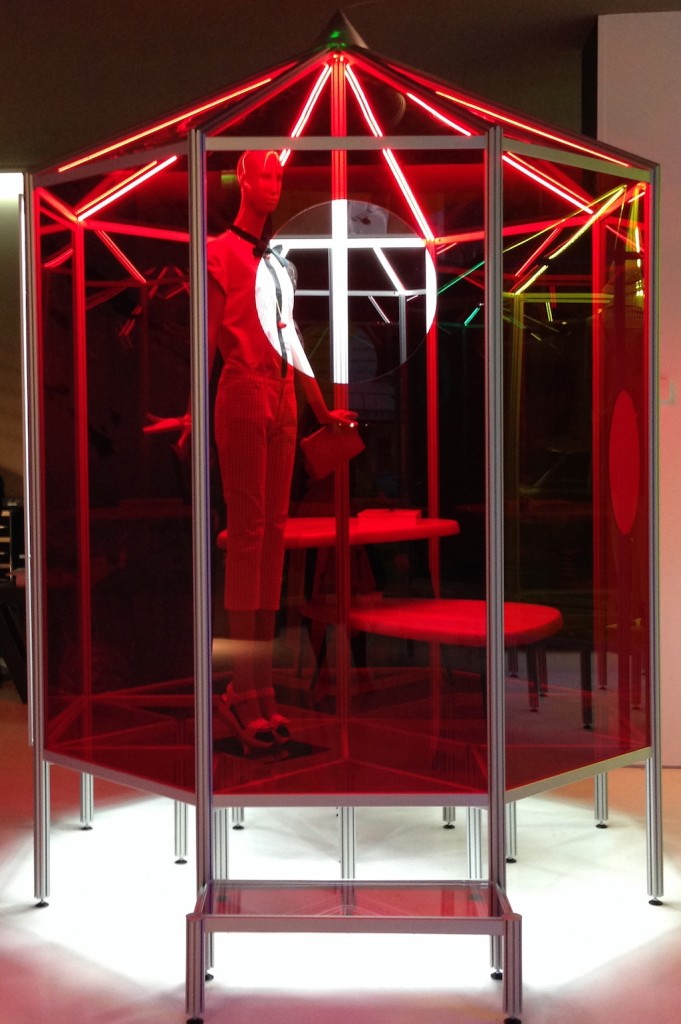 Right – During the exhibition, I had the immense pleasure of meeting and chatting with Pernette Perriand, daughter of Charlotte and Gianluca Armento, Cassina Brand Director.

Each of these capsules housed a special preview of Charlotte Perriand prototypes: the small Indochine swivel armchair in wood, the organic shaped high and low Mexique wooden tables and the LC4 CP tribute edition of the iconic chaise-longue. 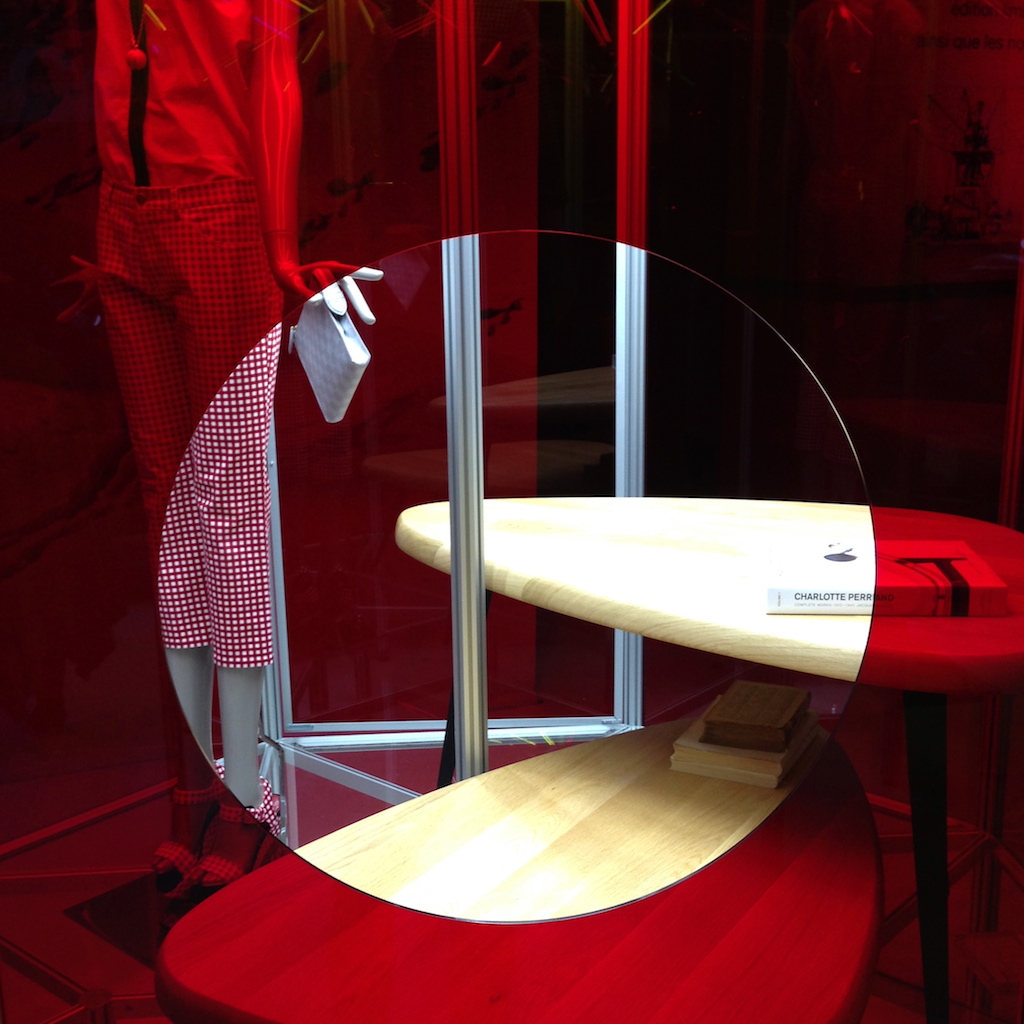 “The Mexique table was created in 1952 for the students’ rooms of the Maison du Mexique at the Cité Universitaire Internationale in Paris. Its triangular shape with rounded corners was conceived in order to occupy as little space as possible in the room to facilitate movement between the armchair, bed and desk. This kind of table with tapered wooden legs and triangular table top was part of the en forme libre tables and was developed by Charlotte Perriand in 1938-1939. The triangular shape also allows more tables to be combined to form squares or rectangles, extending the area of use. The thickness of the solid wood table top allows the natural beauty and warmth of the wood to be appreciated and the profile of the top’s border is functional for the shape and size of the hand. 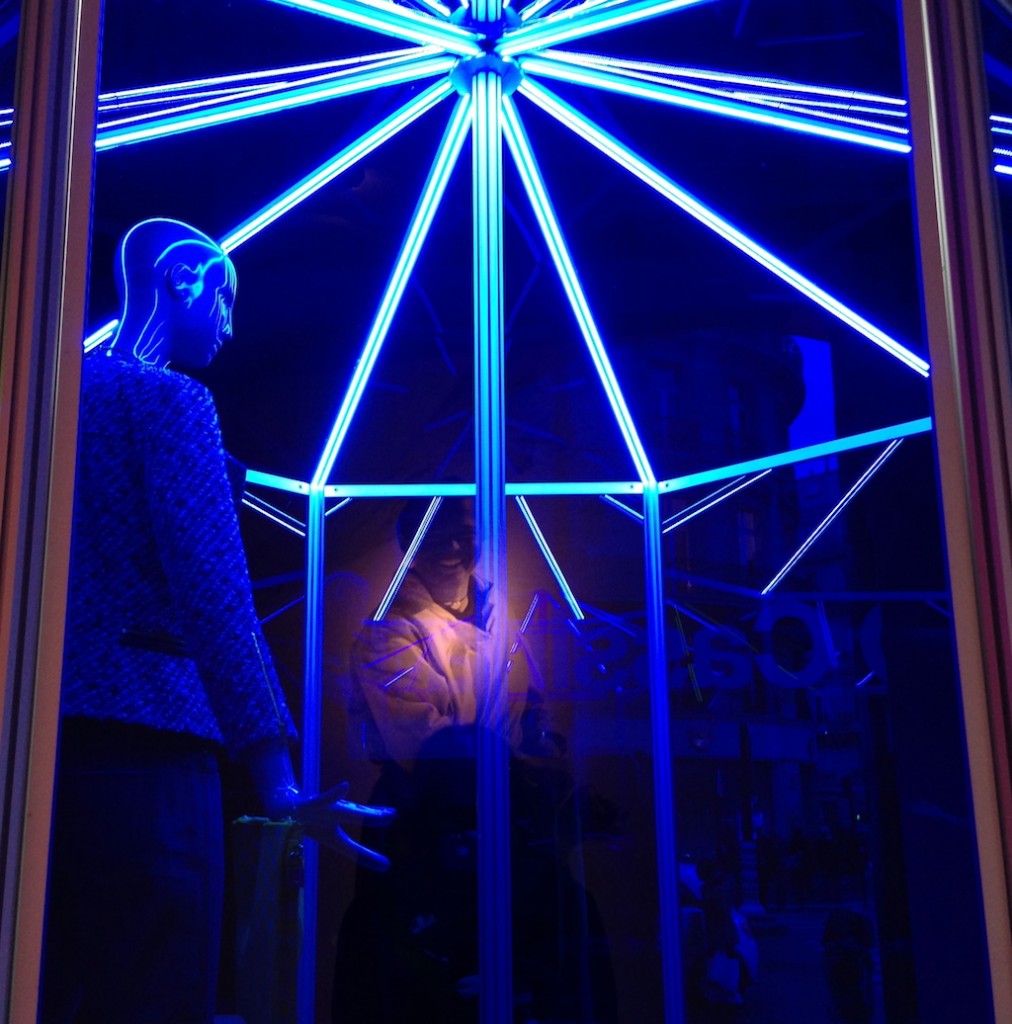 “What is sweeter than touching a polished fir table top, sweet like the legs of a woman”, Charlotte Perriand noted in the Triennale di Milano catalogue in 1951. In 1952, Charlotte Perriand replaced the tapered legs with triangular sectioned legs in folded matt black sheet metal attached to the table top. Elegant and slender they were created to “give importance to the table top rather than its support” Charlotte wrote in 1950 in an article in the L’art d’Habiter. In 1956, Charlotte Perriand created a low version of the Mexique table for the Galerie Steph Simon, the renowned Parisian gallery where Charlotte Perriand and Jean Prouvé were the main protagonists. As a result Perriand created a family of tables which harmoniously meet the requirements for the organisation of night, day and communal environments. The tables, which will be available in solid Canaletto walnut and natural oak, will be authenticated with the progressive production number, Charlotte Perriand’s signature and the Cassina I Maestri Collection logo.” 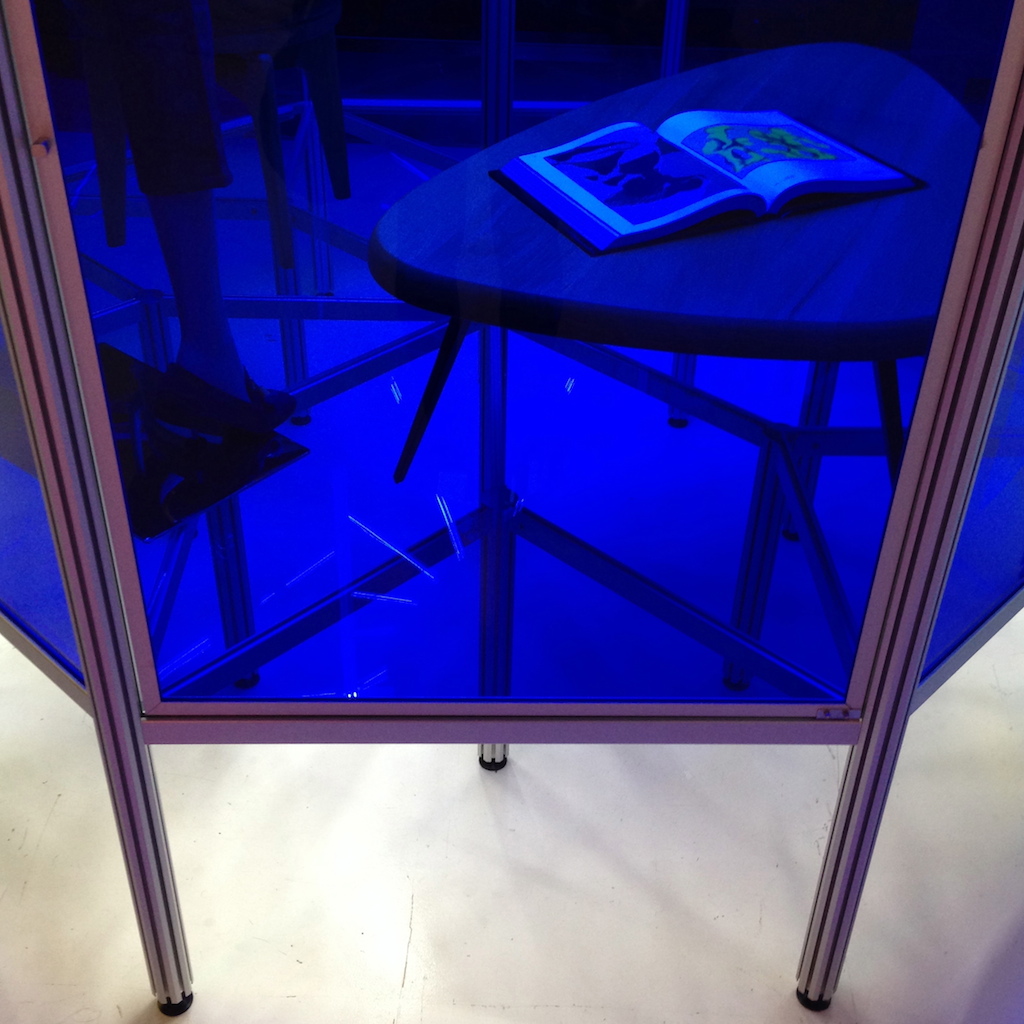 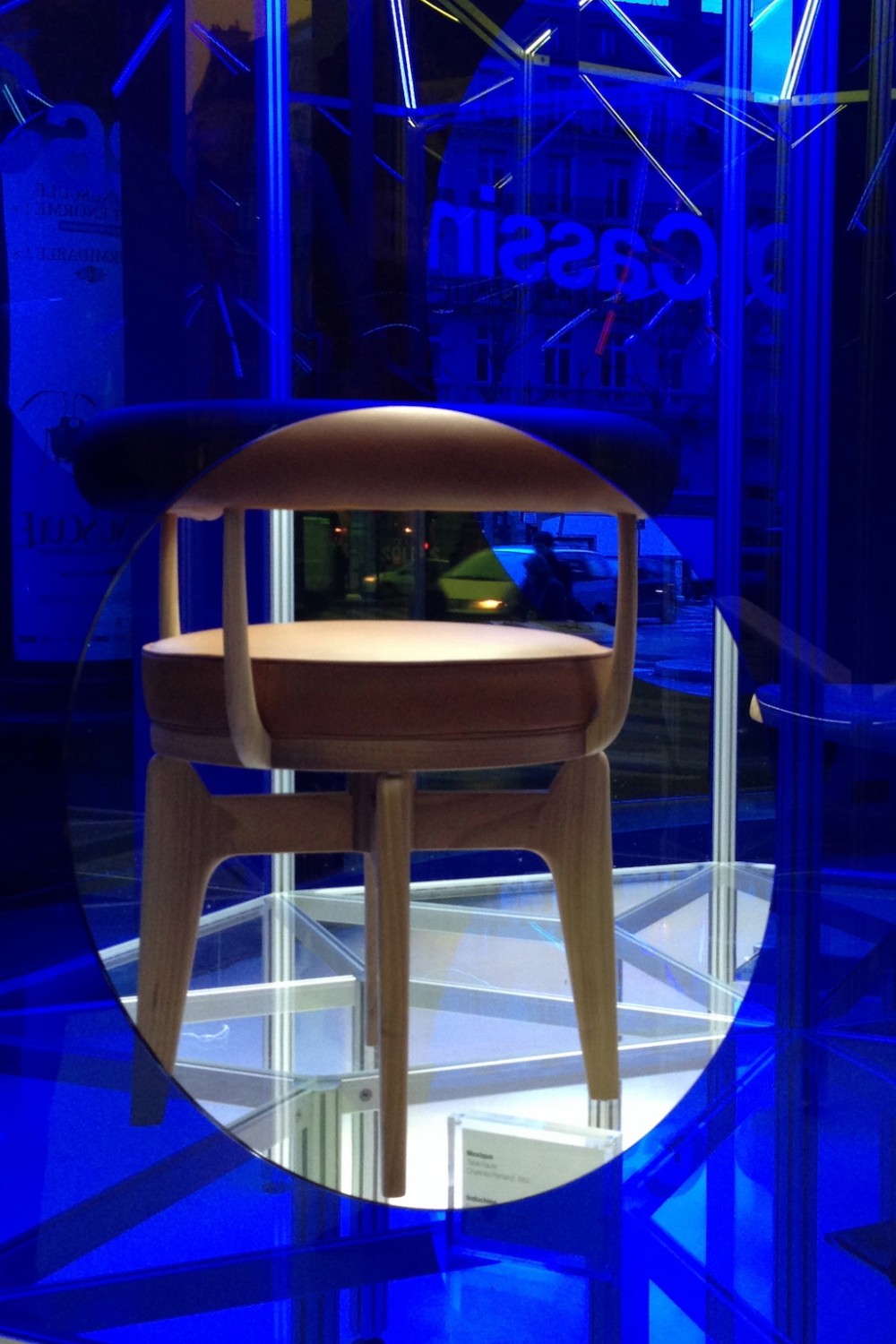 “This version is an adaptation in wood of the small LC7 metal framed armchair which Charlotte Perriand designed in 1927, before she met Le Corbusier, and that was successively included in the range of furniture by Le Corbusier, Pierre Jeanneret, Charlotte Perriand presented at the Salon d’Automne in 1929. The small armchair, designed in Vietnam in 1943 for personal use, was created with craftsmanship techniques and materials that were available during the war. The first project had three legs but did not offer the right stability: following this observation Perriand adapted it with a four-legged version.

Charlotte Perriand always adapted models using the materials and techniques that were available to her, just like the project programme and the place of production. Indochine will be produced in solid walnut and stained black ash-wood and the padded backrest and seat will be upholstered in leather or fabric. The small armchair will be authenticated with the progressive production number, Charlotte Perriand’s signature and the Cassina I Maestri Collection logo.” 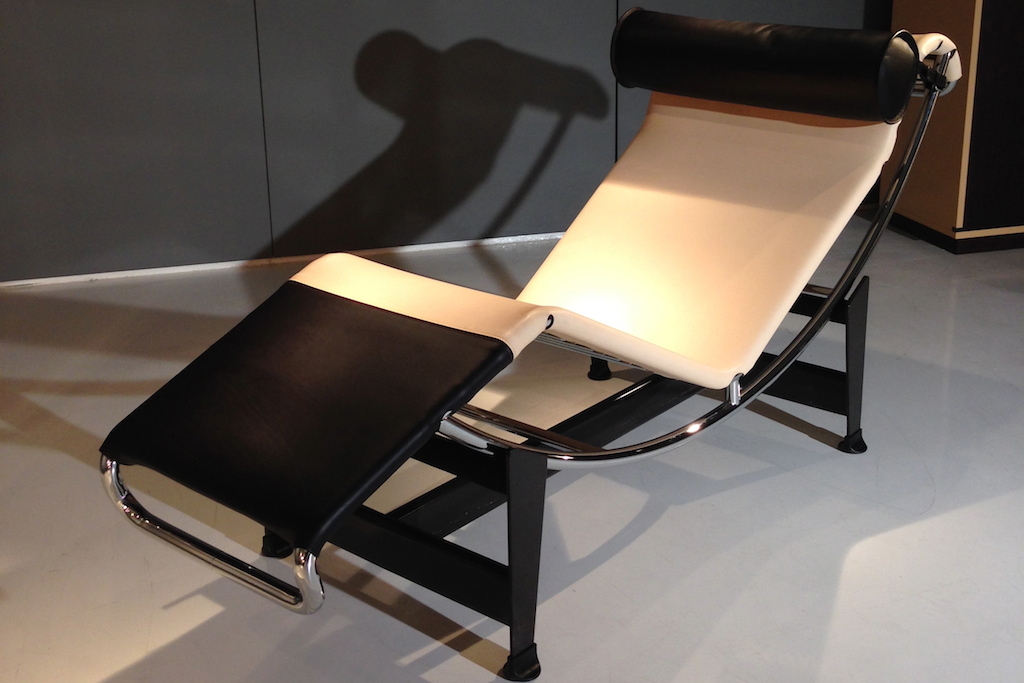 The LC4 CP ‘relaxing machine’ by Cassina and Louis Vuitton

“The inspiration of this limited edition (1000 pieces) of the evocative LC4 chaise-longue designed by Le Corbusier, Pierre Jeanneret and Charlotte Perriand dates back to the then controversial – now renowned – photo of Charlotte Perriand relaxing on one of the first models of the chaise-longue with a self-supporting mattress attached directly to the frame. Considered as the ultimate ‘relaxing machine’ this object has always been special for Charlotte Perriand as it perfectly reflects her idea of functional furniture which caters to the natural human form to create maximum comfort.” 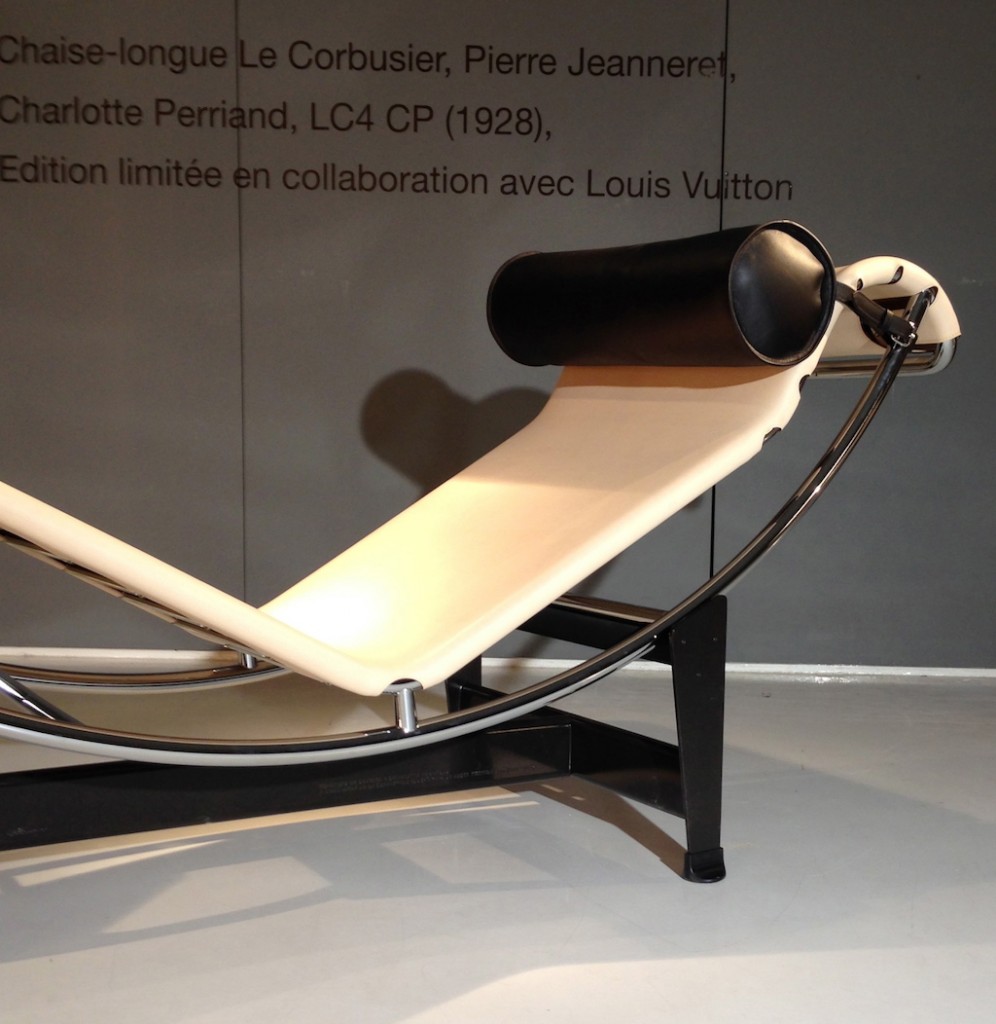 “The LC4 CP tribute edition has been developed using Louis Vuitton’s expertise in saddlery craftsmanship: it has the same self-supporting mattress as the first model but in natural cow hide leather and a contrasting dark brown saddle-leather for the foot and headrest, all supplied by Louis Vuitton’s tannery.” 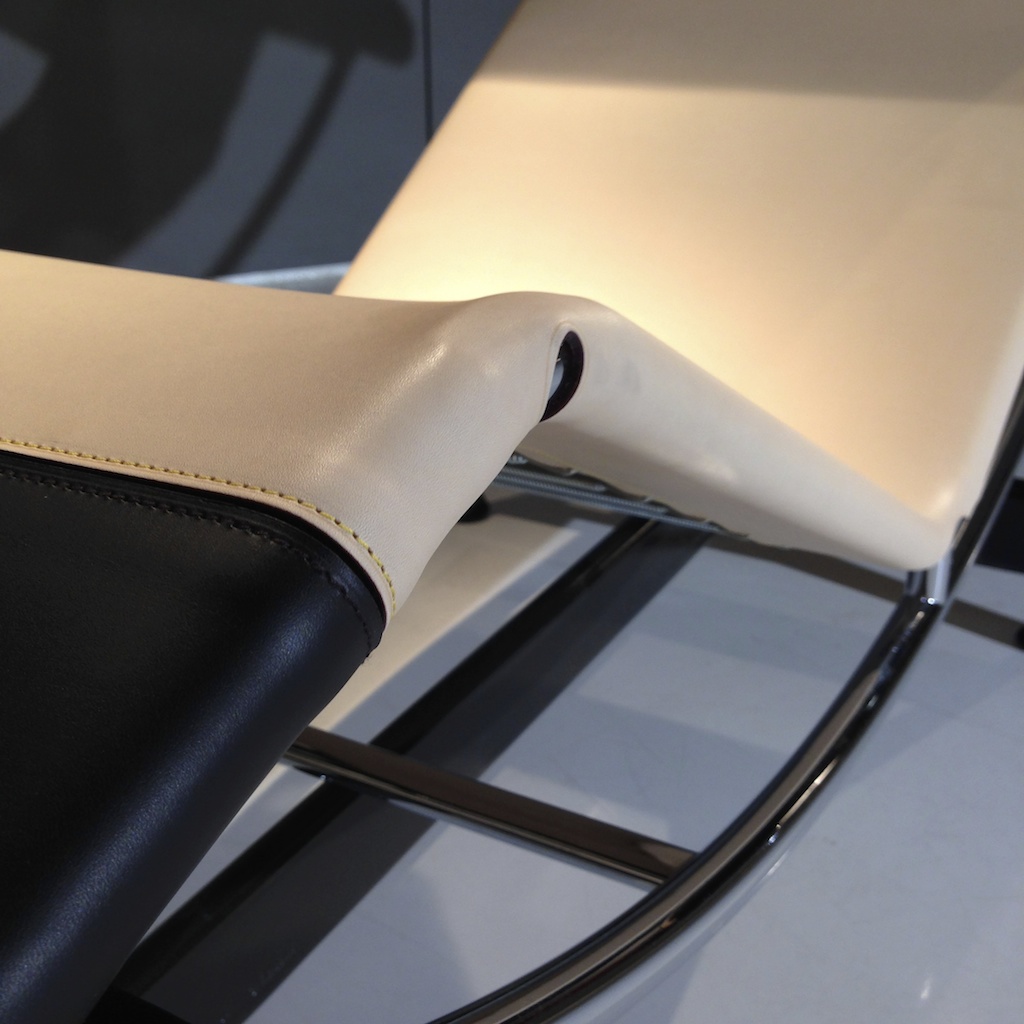 “Characteristic details can be particularly recognised in the yellow stitching of the natural saddle leather and the elegant leather headrest straps which recall the workmanship of the Louis Vuitton signature handbags. Each basalt coloured base carries the dedication“Hommage de Cassina à Charlotte Perriand à l’occasion de la Collection Icônes 2014 de Louis Vuitton” and is authenticated with the progressive limited edition production number, and the authors’ signatures along with the Cassina I Maestri logo are engraved, as always, on the chrome structure. This distinctive design icon is available at premium Cassina boutiques around the world. Cassina is the only authorised company to manufacture furniture designed by Charlotte Perriand.” 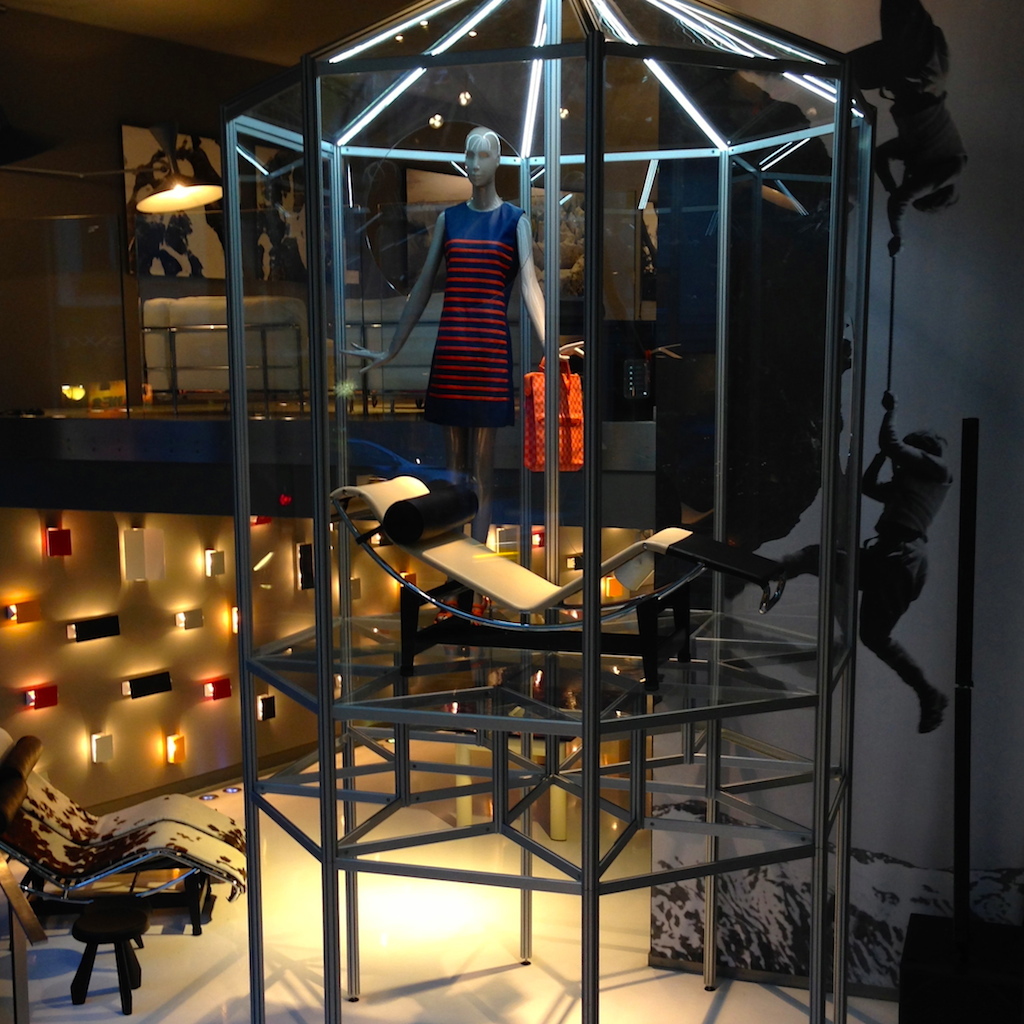 About  Charlotte Perriand – Charlotte Perriand (1903-1999) holds full membership of the avant-garde cultural movement which, from the first decades of the twentieth century, brought about a profound change in aesthetic values and gave birth to a truly modern sensitivity towards everyday life. In this context, her specific contribution focuses on interior composition, conceived as creating a new way of living, still today at the heart of contemporary lifestyle.

In the sphere of twentieth century furnishing history, the advent of modernity made possible the entrepreneurial audacity of this true reformer of interior design. At the beginning of her professional career Perriand was acclaimed by critics for her Bar under the roof, exhibited at the Salon d’Automne in 1927, constructed entirely in nickel-plated copper and anodized aluminium. In the same year, when she was just twenty-four years old, she began a decade-long collaboration with Le Corbusier and Pierre Jeanneret, at the famous design studios at 35 rue de Sèvres in Paris.

Charlotte Perriand’s presence at the Le Corbusier studio is visible in all the furnishings designed together: here she became a cornerstone in the reformation project promoted by the architect, adding a distinct dimension of humaneness to the often cold rationalism of Le Corbusier. In her creations she manages to animate the fundamental substance of daily life with new aesthetic values: in particular her talent and intuition in the discovery and use of new materials manifest themselves to their full extent. 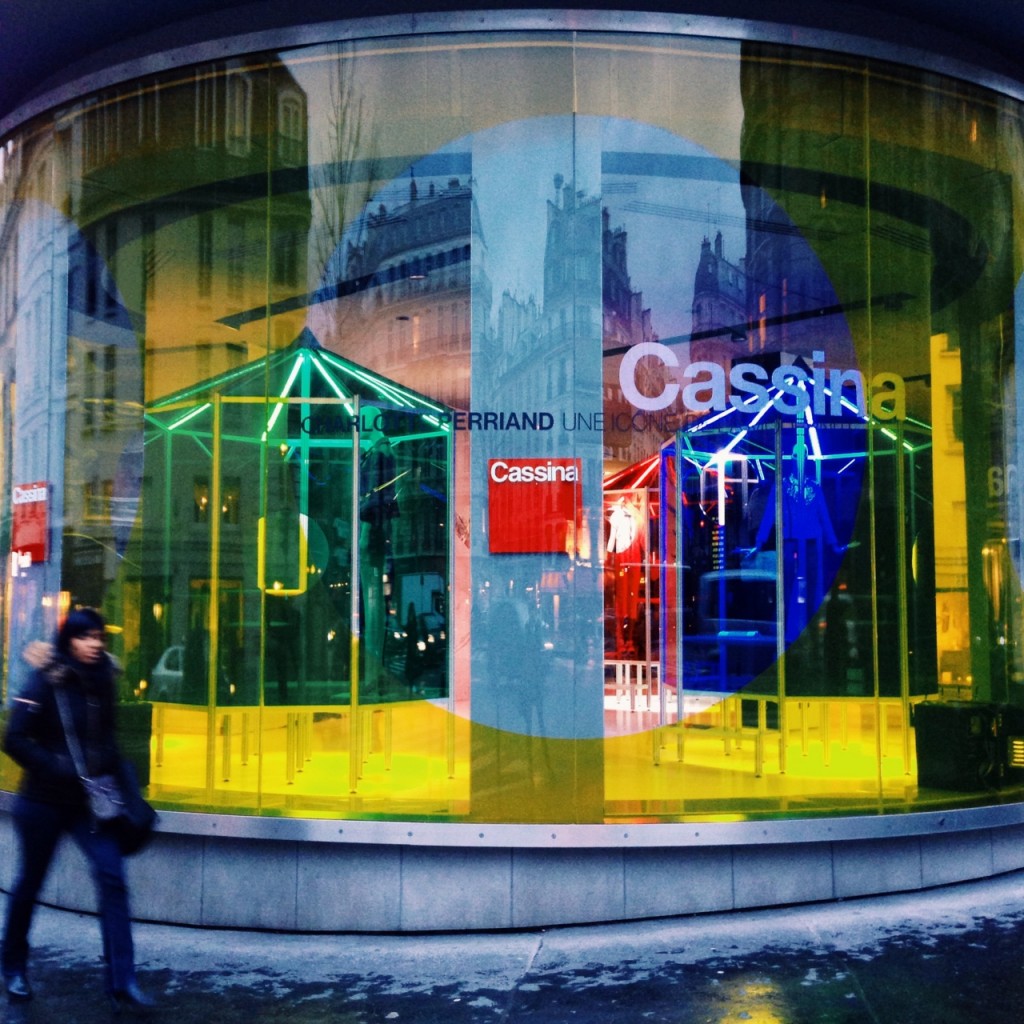 The ten-year long collaboration with Le Corbusier and Pierre Jeanneret, and her Japanese experience, represent periods of intense creative effervescence in the life of the artist. During her long stay in the Far East (‘40-‘46), she reveals her artistic talent to the full, through a reinterpretation of the reality of life to echo both tradition and modernity. By way of example, worthy of mention are the furnishings produced using traditional bamboo processing techniques, capable of enhancing the new forms already experimented using steel-tubing.

After her professional work as an architect, she concentrated on a series of original and balanced productions, commissioned by top-level authorities and leading companies of the calibre of Air France, and by a number of foreign organisations, authenticating the fame she had by now gained on the international scene.

Charlotte Perriand’s personality was particularly characterised by her sincere loyalty to and great passion for the principles of humane and innovative rationalism, preserved intact in her projects and recreated in the Cassina I Maestri Collection. 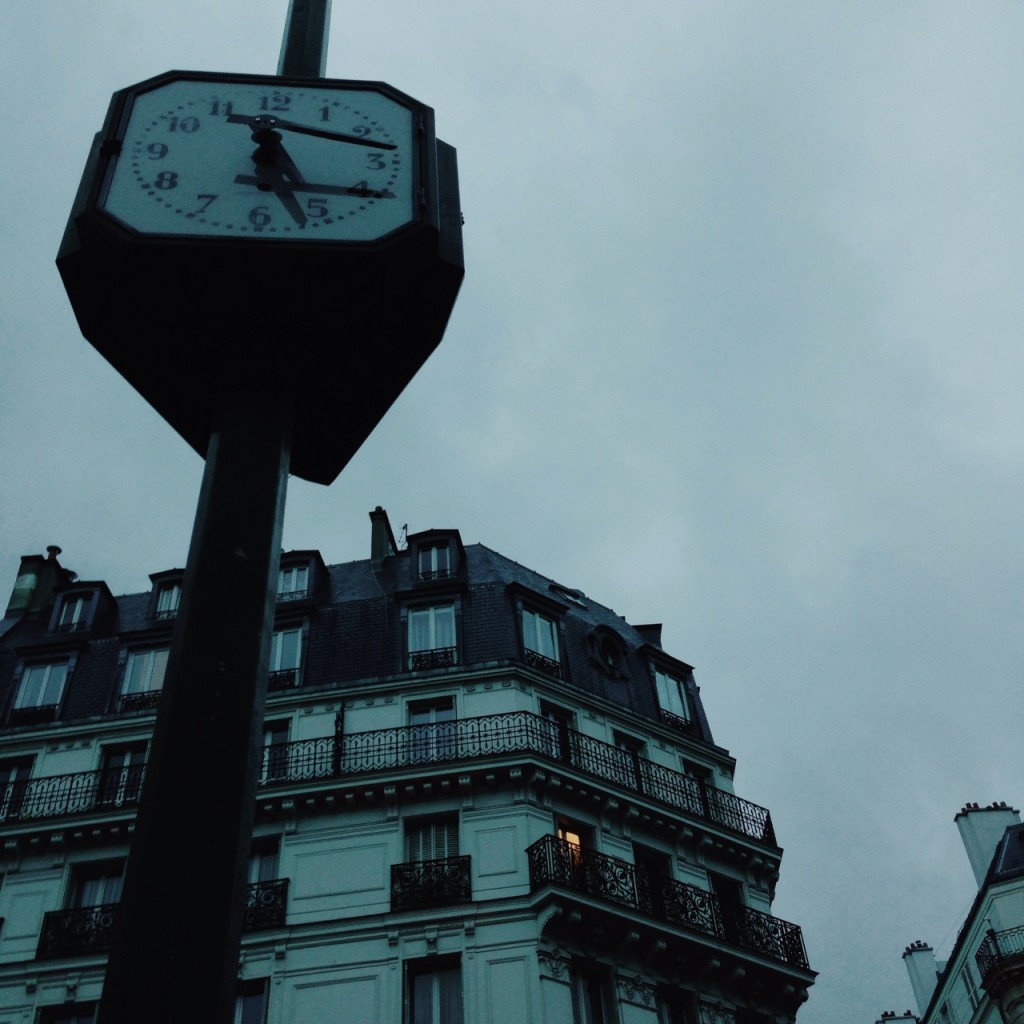 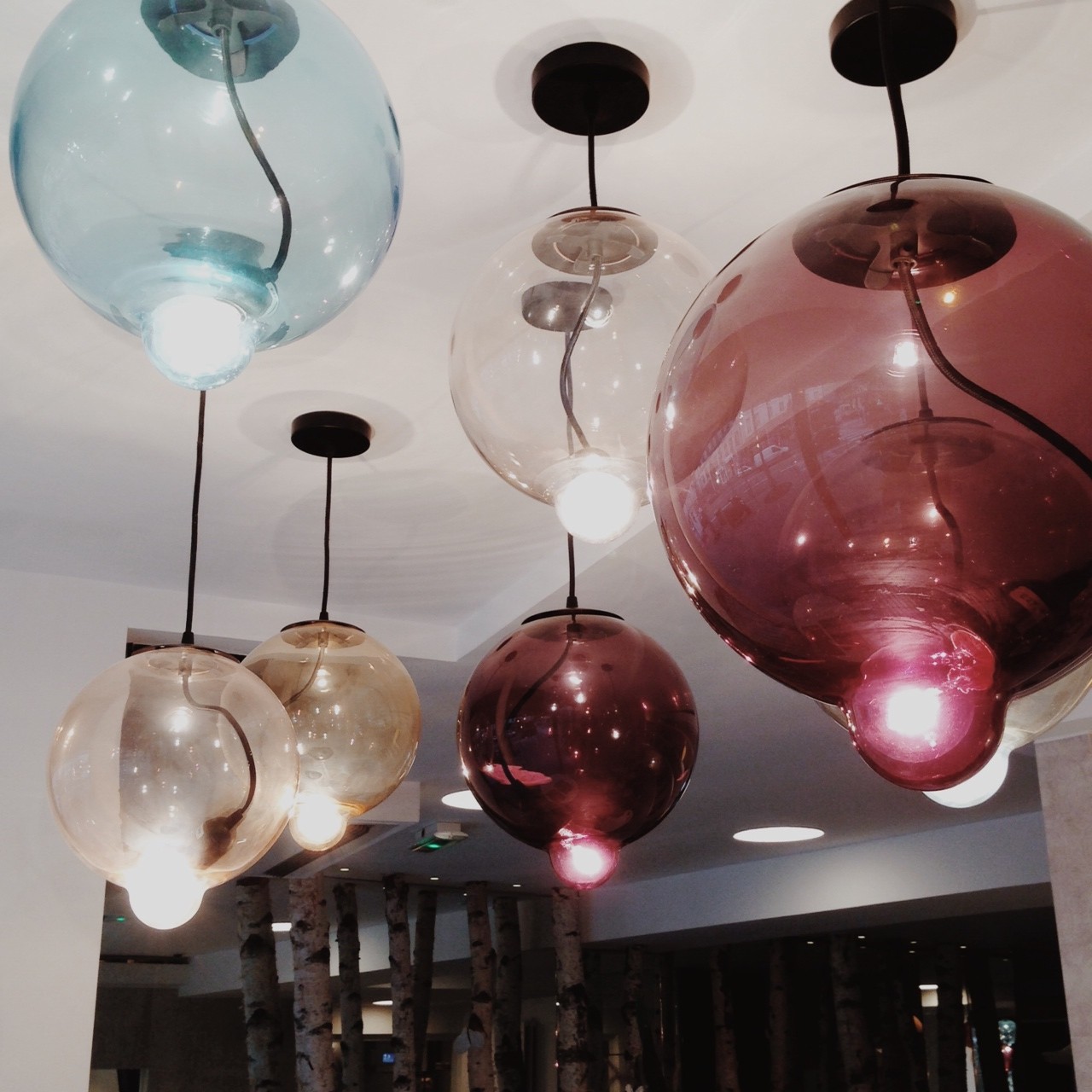 A Night at Hôtel Chavanel in Paris 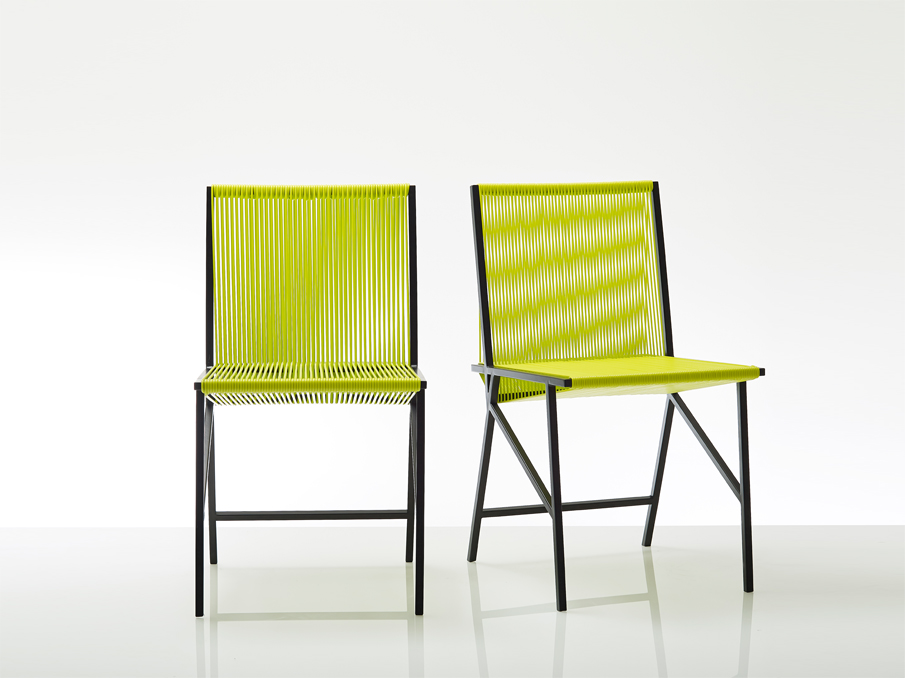 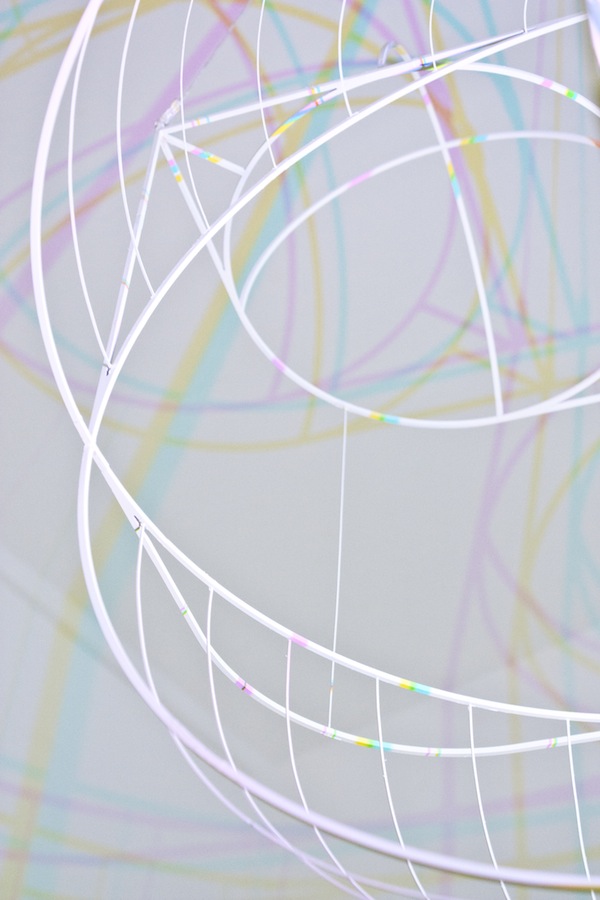